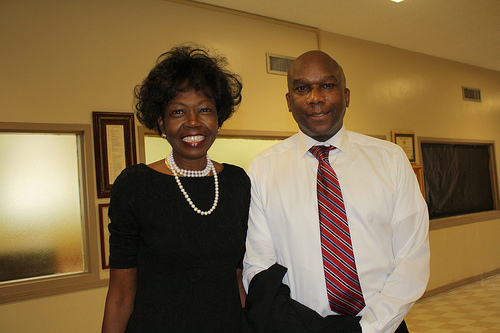 To celebrate the 50 year anniversary of the Civil Rights movement, husband and wife judges Eugene and Annetta Verin attended a service at the 16th Street Baptist church. By Alyana Alfaro

In Birmingham, Alabama’s largest city, wealthy and poor communities sit nestled alongside each other, beautiful homes only blocks away from low- and middle-income housing. Like much of Alabama, the city is still divided, with issues like poverty and racial tension still prevalent.

Despite the fact that 19 percent of the population qualifies for federal need-based aid, over 50.6 percent of Alabamans identify as conservative, according to Gallup. Out of Alabama’s 67 counties, 54 have poverty levels above 17 percent, according to the USDA Economic Research Service.

For Emanuel Merriweather, 25, the division of rich and poor is a fact of life in the state.

“You always have the richer side of town and the Section 8 side of town,” Merriweather said. “I see segregation everywhere.”

On Oct. 26, Merriweather came to Birmingham from Montgomery to watch the Magic City Classic, a football game that pits teams from historically-African American colleges, Alabama A & M and Alabama State University, against each other.

Less than an hour away another football rivalry was facing off in Alabama. At Tuscaloosa’s University of Alabama campus, the Crimson Tide was taking on the University of Tennessee. At both games, the self-imposed segregation Merriweather mentioned was evident. Tailgaters for the Magic City Classic were overwhelmingly black while their counterparts at ‘Bama were overwhelmingly white.

In 1956, ‘Bama was the site of one of the first desegregation attempts in Alabama when Authrene Lucy became the first African American to enroll at the University. She was chased out a week later and expelled.

In today’s Alabama, over 26 percent of the population is African American, which is double the national average of 13 percent, according to the U.S. Census Bureau. Even so, under-representation still exists at institutions like the University of Alabama where 79 percent of the student body is comprised of Caucasian students.

While Alabama was the hotbed of the Civil Rights movement 50 years ago, former activists like Elaine Walbert,93, say that racial tensions are still high in the state.

“It is, of course, better,” she said. “There is still a lot of racism. Our history has to be taught and we have to make sure all those marches we did, everything we fought for, counts.”

And for parishioners at Birmingham’s 16th street Baptist Church— famous for ties to Martin Luther King Jr. and the bombings that killed four young girls and turned the tide on segregation—assuring that race relations continue to progress is still very much on the agenda.

Before the Oct. 27 service, African American judges from all over the state gathered in the church’s basement, waiting to attend a service in the famous three-tier chapel.

During the service, Rev. Arthur Price Jr. had all 98 judges stand as he animatedly proclaimed he was thankful the Civil Rights movement had made way for African Americans in the courtroom.

“We used to be in court rooms where we had no representation,” he said. “Just because they look like us does not exempt us from doing good but it does mean we will be judged more fairly.”

Eugene Verin is a circuit judge from Bessemer, Ala. For him, coming to the 16th Street Baptist Church and meeting with other judges in what he called a “historic event” was his way to pay tribute to the Civil Rights movement.

“Fifty years ago, there were no black judges,” Verin said. “The city of Birmingham has been commemorating 50 years of Civil Rights so, in honor of that, we are attending service here.”

Lorraine Pringle is a family court judge in Bessemper, Ala. who also attended the event. While she said the Civil Rights movement has made significant progress over the years, she has high hopes for the state in terms ending discrimination.

In 2011, Alabama passed HB 56, a law intended to limit illegal immigration. The laws allow police to stop anyone at anytime if they have a concern he or she may be in the U.S. illegally. The law has faced significant opposition and the constitutionality has been questioned.

“I dream that Alabama will become a melting pot,” she said. “Ninety percent of what is in the U.S. came from somewhere else. We are all immigrants, so why discriminate?”

Pringle believes that Alabama’s immigrants are facing discrimination, even from members of the African American community.

“Some civil rights groups only believe that those rights extend to African Americans,” Todd said. “When you start taking about gays or Muslims or immigrants tit doesn’t apply to them. It is a human rights issue for me.”

According to Todd, the HB 56 law is actually hurting the state’s economic growth.

“The work immigrants do is back-breaking and most Americans won’t do it,” she said. “We have a lower-than-average unemployment rate, these people clearly aren’t taking our jobs.” 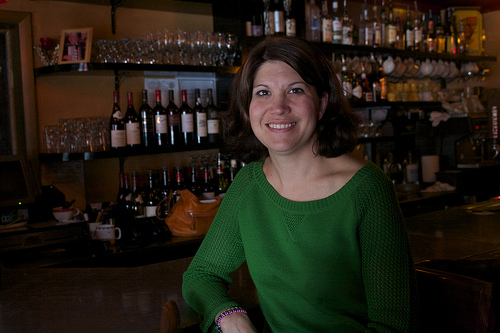 Miranda Rolen is the manager for Chez Lulu in Birmingham’s English Park neighborhood. She said that business is doing well. By Alyana Alfaro

Miranda Rolen is the manager at Chez Lulu, a French bistro in Birmingham’s English Village neighborhood. She said that “business is booming” and the economy in Birmingham is “strong.”

“We do great,” she said. “The owner also owns a bakery, just next door, and both businesses are very successful.”

‘When the government was shutdown, we couldn’t access the system,” she said. “You also need all this strict documentation, which is hard for some people.”

While Rolen said that Chez Lulu employs several immigrants, she said that the system makes it hard for undocumented people to find work.

“If you’re illegal, there is no way you’re passing the strict checks,” she said.

For E-verify employee Danielle Marshall, however, E-verify is worth using despite delays.

“The system gives us a way to know if someone missing a critical part of the documents that would let them work here,” she said. “We give them eight days to fix it, and if they can’t they just can’t work here. It means they probably aren’t supposed to be here.”

Despite immigration laws, the population of Alabama has sored, rising from 3.8 million in 1980 to 4.8 million today. A big reason for the jump is immigration. In the past, Latinos made up less than 2 percent of the Alabama population but, today, they comprise over 4 percent and the population is steadily rising, according to the U.S. Census.

According to Brian Jones, Public Relations Director if Alabama Tourism, the reason Alabama is appealing for immigrants is the agricultural industry, the largest source of commerce in the state.

“We are very big on agriculture,” he said. “Food and farming has always been a big part of southern culture.”

For Jones, the other reason for Alabama’s growth stems from what the state itself has to offer.

“Alabama is just beautiful,” Jones said. “We have a rich history, beautiful beaches, nice people. Of course people want to visit. Of course they want to live here.”